The new reference for rongorongo researchers has arrived

Rongorongo studies – the study of the undeciphered script of Rapa Nui – is a task reminding us of the old Greek tragedy of Sisyphus. A new reference work detailing years of research by Paul Horley, titled Rongorongo. Inscribed objects from Rapa Nui, is now available from Rapa Nui Press. 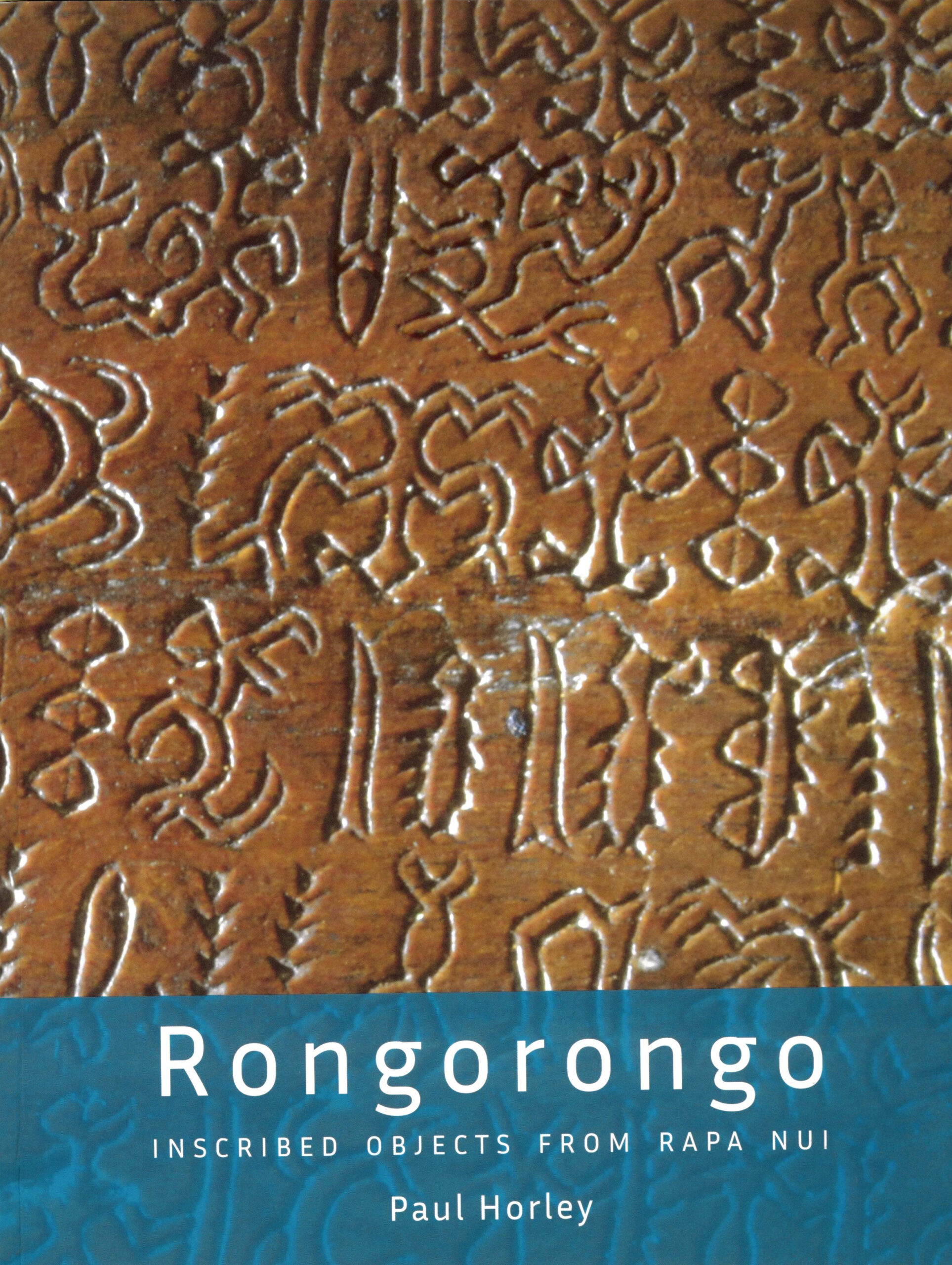 Rongorongo is one of the few written scripts invented by humankind, and was first discovered on the small island of Rapa Nui in the 1860s. The script consists of figures carved in alternate lines into a piece of wood. “The original name—or perhaps description—of the script is said to have been kohau motu mo rongorongo (tablet incised for chanting out), shortened to kohau rongorongo. There are also said to have been more specific names for the texts based on their topic. For example, the kohau taꞌu (tablet of years) were annals, the kohau îka (tablet of fishes) were lists of persons killed in war (îka, meaning “fish” is a poetic expression for a war casualty), and the kohau ranga “tablet of fugitives” were lists of war refugees.” (adapted from https://en.wikipedia.org/wiki/Rongorongo).

At one time rongorongo tablets were common on Rapa Nui, but either through the influence of missionaries or due to their own disregard for a script that no one – after many of the most learned individuals had been kidnapped, and later perished, during the Peruvian slave raid in 1862 – could read any more. Many of the rongorongo tablets were burned or stored in secret caves in the following years. A few tablets were rescued and ended up in museum collections around the world. The amount of source material that is preserved seems too scant for researchers to decipher the script with any brute-force method, and only slow, meticulous study of the source material, the historical context, and the legends of the island might bring anyone closer to the words literally cut into the wood.

Eight inscribed tablets were rescued by the island missionaries, on the order of their Bishop in Tahiti, Florentin Étienne Jaussen, in the years 1869-1870 (Horley 2021:16-17). Although research on the script begun at this time, the first comprehensive cataloguing and study of these tablets were undertaken by the German researcher Thomas Barthel and published as Grundlagen zur Entzifferung der Osterinselschrift (Basis for the Decipherment of the Easter Island script) in 1958.

During Thor Heyerdahl’s archaeological expedition to Rapa Nui in 1955-56 several manuscripts authored by local Rapanui elders, who have attempted to translate individual signs, and written down ancient chants, were brought to light. One extensive manuscript was given as a gift to the Norwegian explorer, while two smaller fragments were traded to the Kon-Tiki Museum. These documents were studied in collaboration with Soviet scholars, who were analyzing rongorongo tablets in the collection of Peter the Great Museum of Anthropology and Ethnography in St. Petersburg. Some results of these studies were published in Reports of the Norwegian Archaeological Expedition to Easter Island and the east Pacific. Volume 2. Miscellaneous Papers (1965).

The latest effort to organize the rongorongo corpus came in 1997 when the New Zealand linguist, Steven Roger Fischer, published his Rongorongo: The Easter Island Script: History, Traditions, Text. The book represents the first comprehensive documentation of Rongorongo, Easter Island’s enigmatic script and Oceania’s only known pre-twentieth-century writing system. The author tells the full history of rongorongo’s exciting discovery and the many attempts at a decipherment and provides full transcriptions of all the 25 surviving rongorongo inscriptions along with detailed photographs of nearly every incised artifact. The book also brings together a comprehensive list of more than 1000 references of previous rongorongo studies.

Both Thomas Barthel and Steven Roger Fischer greatly succeeded with creation and updating of the inscription corpus for rongorongo, offering a solid basis for the researches who dedicate their efforts to the analysis of this script. The continuing development of documentation and imaging techniques since those times permitted even further improvement in the representation of Rapanui glyphs. Currently, several research teams are working in the different parts of the world on 3D documentation of rongorongo objects. The present book provides some first steps in this direction, presenting the new improved tracings of the entire rongorongo corpus completed by Paul Horley after a  detailed study of the original objects (and also their casts and photographs) in museum collections around the world. In the process of this research, he and his collaborators have discovered many new details about rongorongo signs, and applied modern digital methods to enhance the damaged areas of the tablets.

Several rongorongo tablets digitized by the National Museum of Natural History in Santiago, Chile, can be seen online as highly detailed 3-D models.

In his new book, Rongorongo: Inscribed objects from Rapa Nui, Paul Horley gives a comprehensive overview of the field of rongorongo studies, its history, the inscription corpus itself, and presents a discussion of the main signs used in the Rapanui script. It is hoped that this new book will further expand and strengthen the foundation for the future studies of rongorongo. In a Herculean task, we believe that Horley have succeeded in laying the foundation for future studies. A new reference for rongorongo studies has indeed arrived.