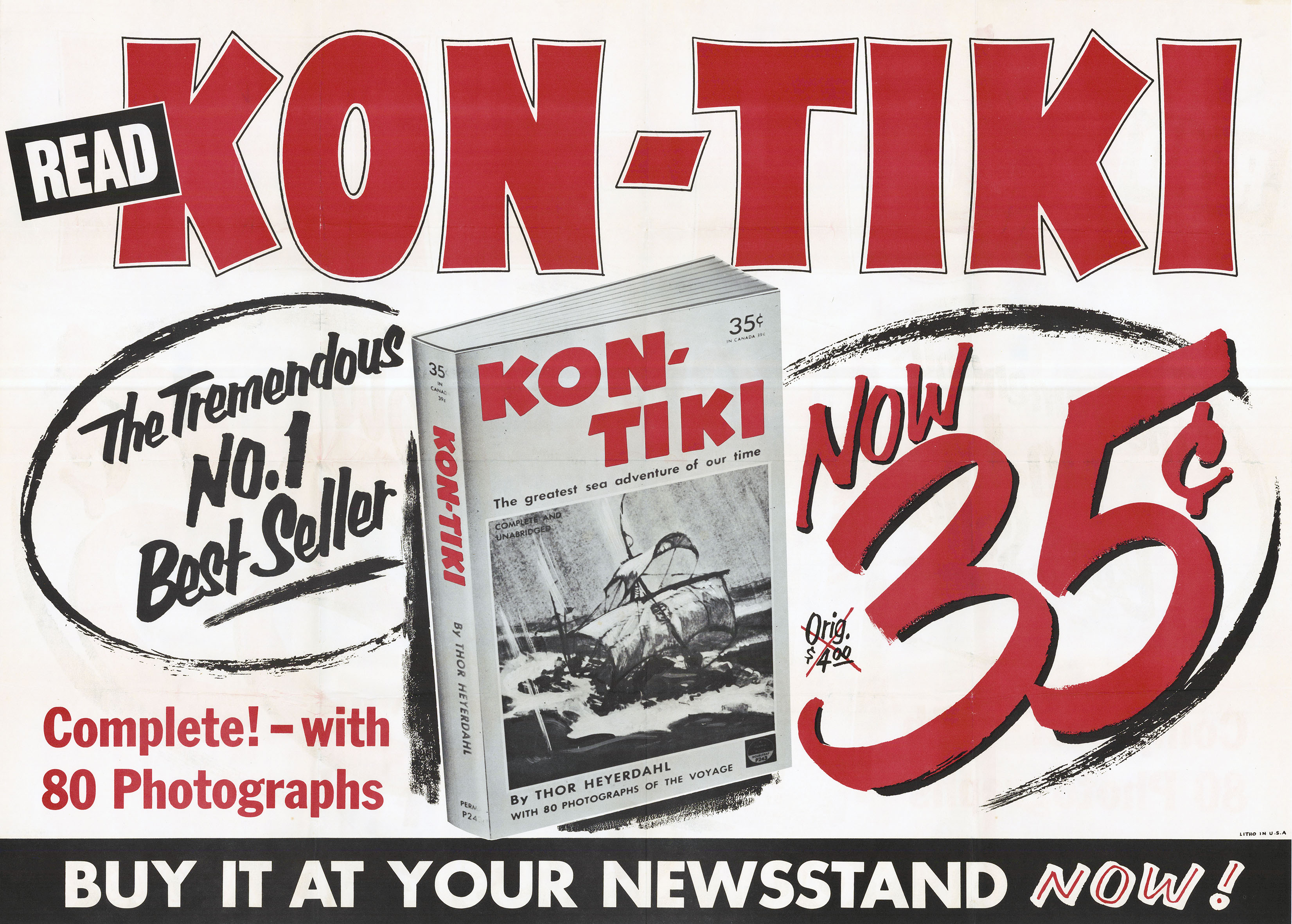 The Kon-Tiki expedition became the most talked about adventure after World War II. With growing fame through the 1950s, the term ‘Kon-Tiki’ became a buzz-word and eventually  a phenomenon of popular culture in its own right. 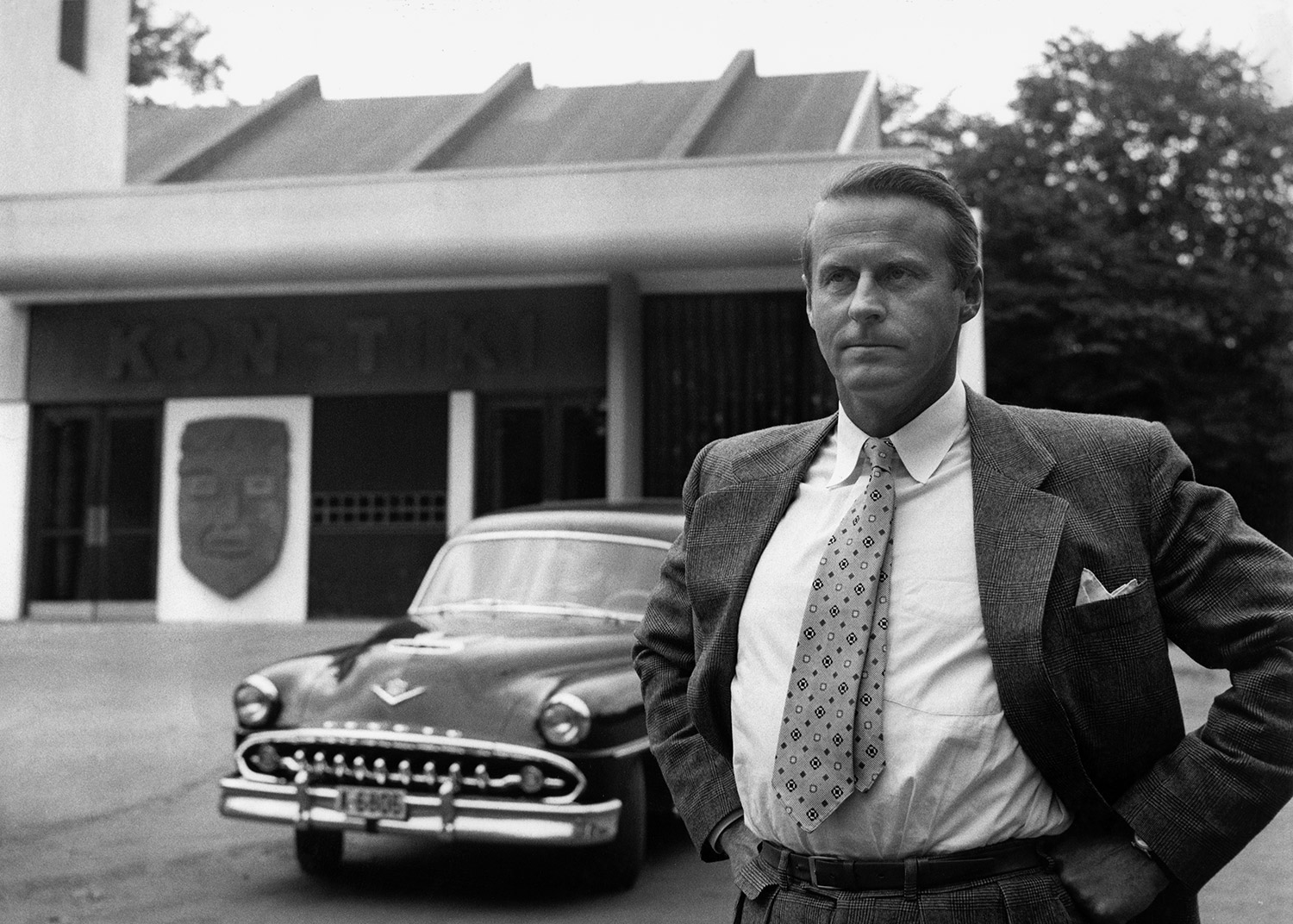 It is a little after 10 in the morning, August 6th, 1947. In mid-Pacific, the Kon-Tiki raft drifts towards the sharp corals of the Raroia reef in the Tuamotu Islands, stern first. A few hours later, radio-waves around the world are buzzing with news of the Kon-Tiki’s successful voyage. The expedition leader, Thor Heyerdahl, becomes world famous in a flash.

The Kon-Tiki expedition became the most talked about adventure after World War II. The book sells over 50 million copies in 74 languages. The documentary is seen by ten times as many in cinemas and on television. Kon-Tiki becomes a buzz-word in the 1950s and a phenomenon of popular culture. 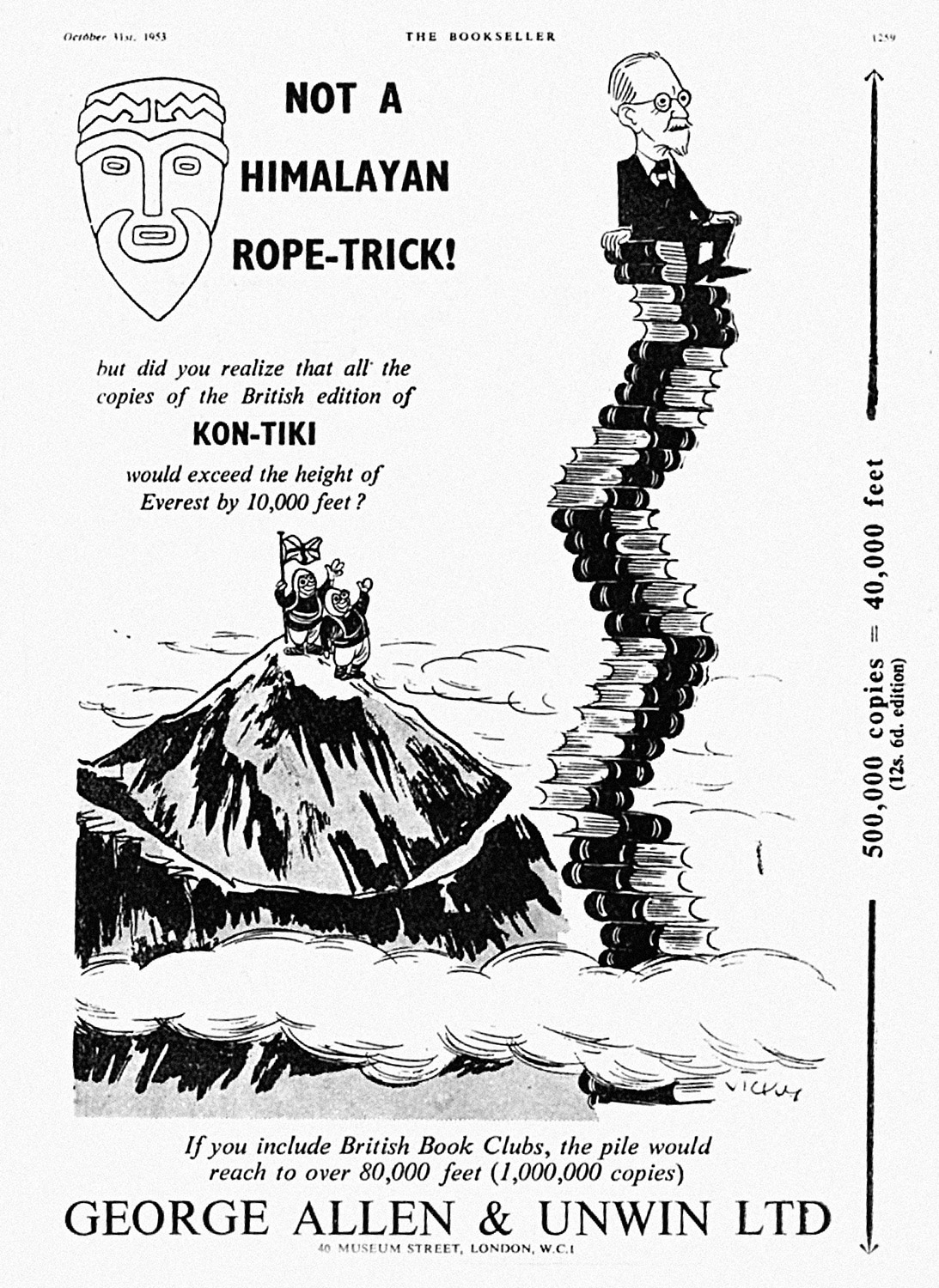 The raft itself was named for the famous Polynesian God Tiki and in the honor of Con-Tiki Viracoccha, the South American cultural hero who, according to popular mythis, sailed into the Pacific sunset looking for a new place to settle. Kon-Tiki, with its hard k-sound, is reminiscent of well-known brand names such as Kodak and Coca Cola. By this slight change, Heyerdahl created a new name that could be trademark protected.

But Heyerdahl never took out a trademark for ‘Kon-Tiki’. It was probably all for the best. The name would not have been used that frequently if businesses were required to pay royalties. It never would have become so wide-spread and popular throughout the world. Kon-Tiki became a phenomenon in popular culture, meaning almost anything exotic or from the South Seas, quite apart from a daring expedition to test the properties of a primitive vessel. 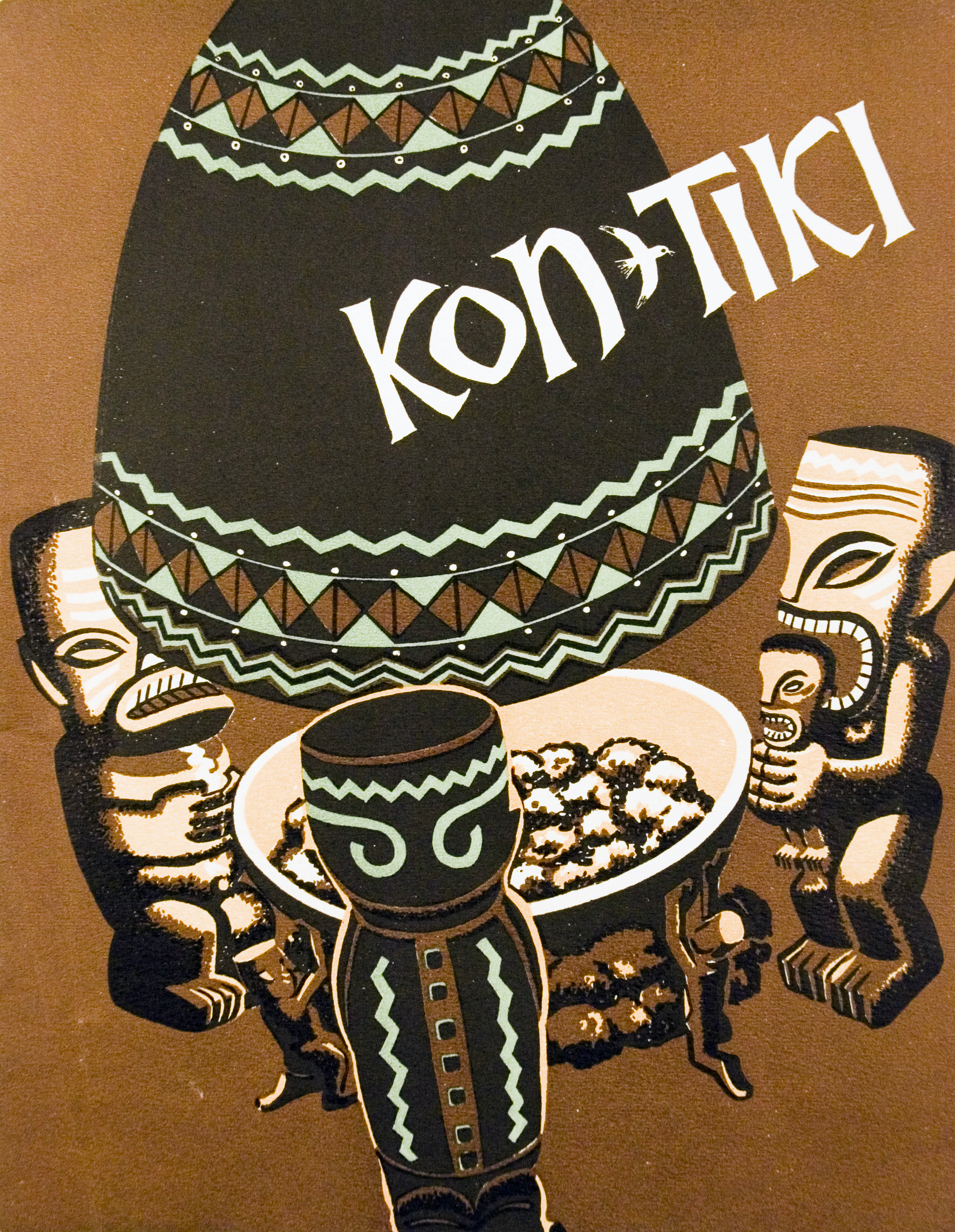 “Tiki” bars and restaurants were the first to adopt the name. Tiki culture began in California in the 1920s, with tourists who wanted to recreate their experience in Hawai’i or on Tahiti. They wished to extend the feeling of happiness in paradise, with palm trees and drinks served in coconuts, and with the familiar up-beat music of the ukulele.

In 1947, with Kon-Tiki fame, this bar and restaurant culture became a world-wide phenomenon. Even on the French Riviera bars and nightclubs were called Kon-Tiki. 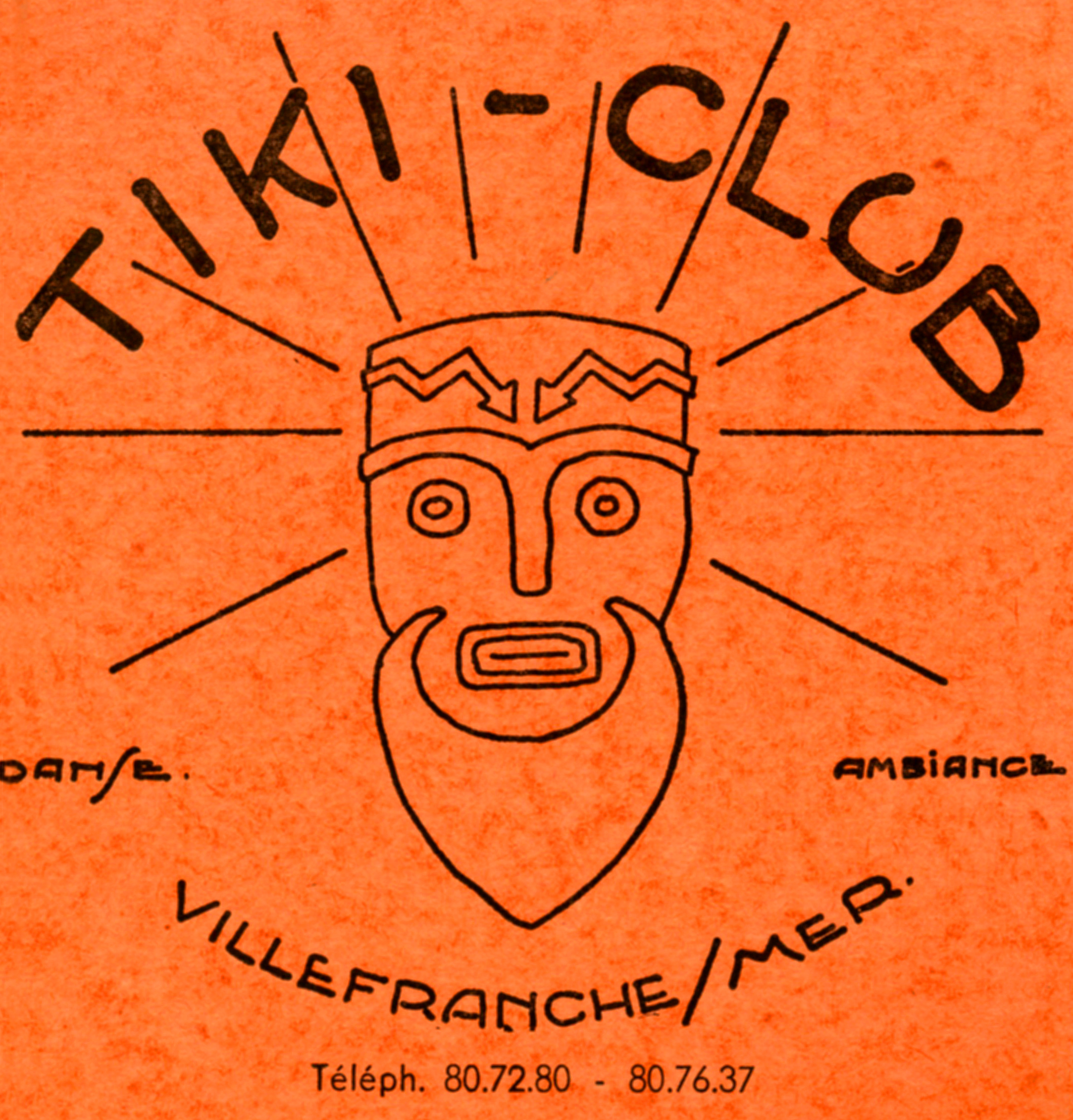 Tiki-Club at Villefranche on The French Riviera, used Erik Hesselberg's drawing from the Kon-Tiki sail as logo (KTM Archives).

Even if you don’t like tropical rum drinks, you can find a “Kon-Tiki” beverage to suit your needs. In Georgia, a lush Kon-Tiki red wine was sold. Or what about lemon liqueur from Germany? Or an orange Bols from the Netherlands? If you are into sophisticated Cognacs, one can be found under the brand-name of Thor Heyerdahl. 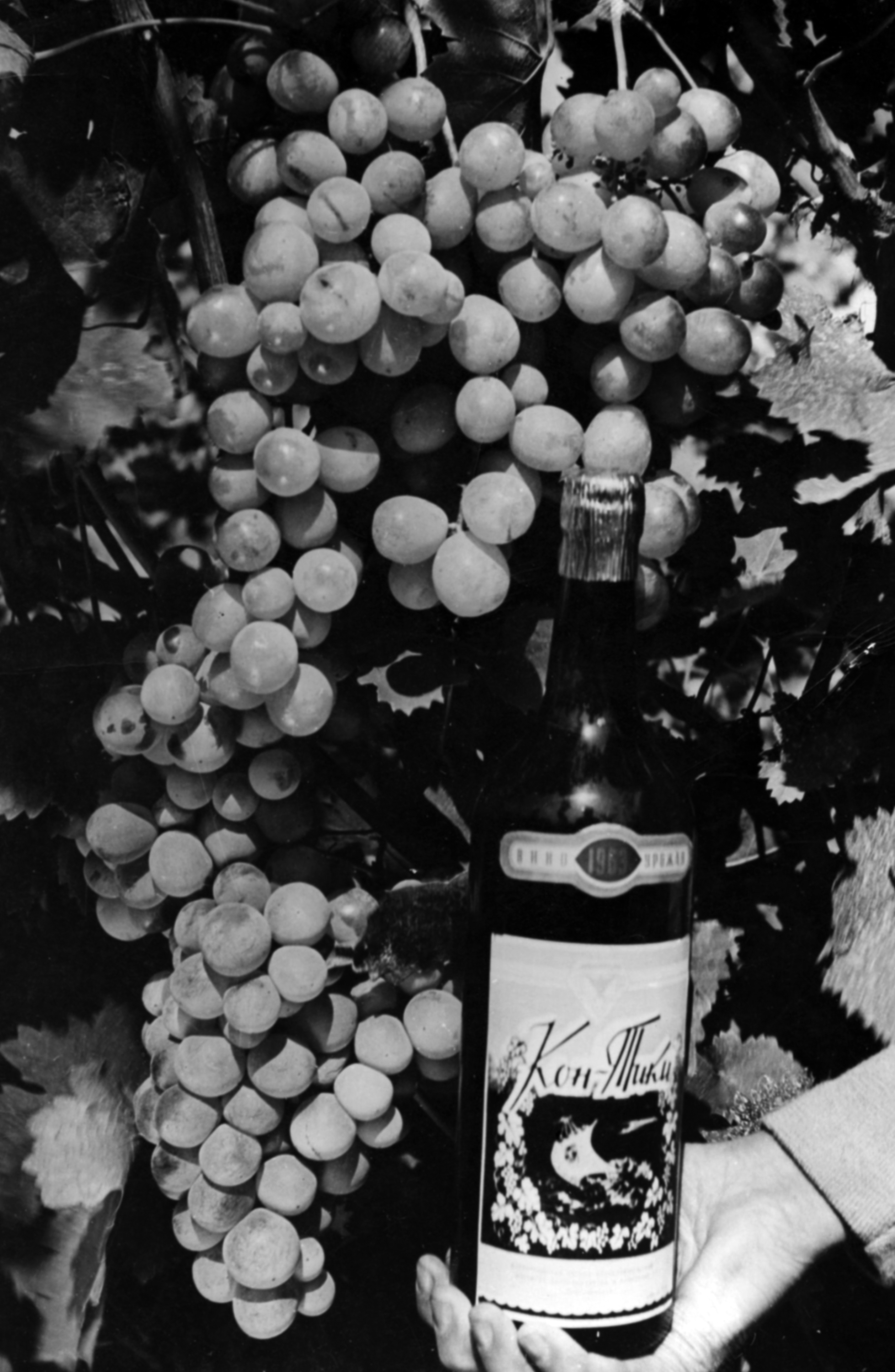 Close-up of the label (KTM Archives). Even in Norway were restaurants named after the famous raft. The most famous was at the national trade-fair center at Sjølyst, just a few miles from the Kon-Tiki Museum. It was designed Erik Hesselberg, the expedition navigator and artist who painted the famous Kon-Tiki face on the sail. He designed several such restaurants, including one in Hamburg. As the phenomenon grew, hotels and campsites were also named Kon-Tiki, and some of them exist today. Many a Kon-Tiki glass-bottomed boat have roamed the lagoons outside tropical resorts. 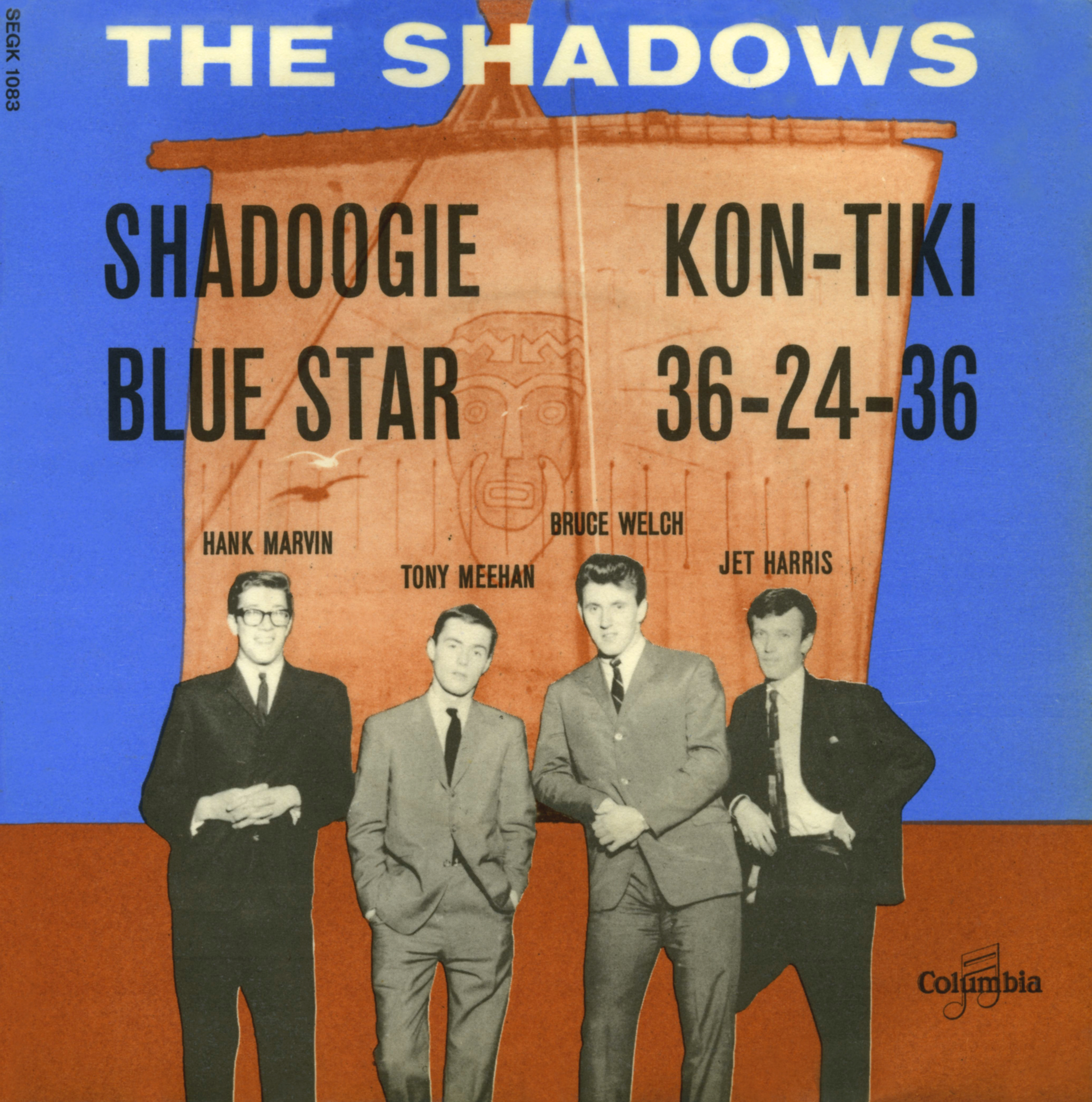 Also, the new generation of rockers found Kon-Tiki exciting. Just listen to The Shadows, Kon-Tiki, an instrumental that became a No. 1 hit on the UK Singles Chart in October 1961. The song is written by Michael Carr. One of the singles released feature The Shadows at the Kon-Tiki Museum in front of the equally famous raft. 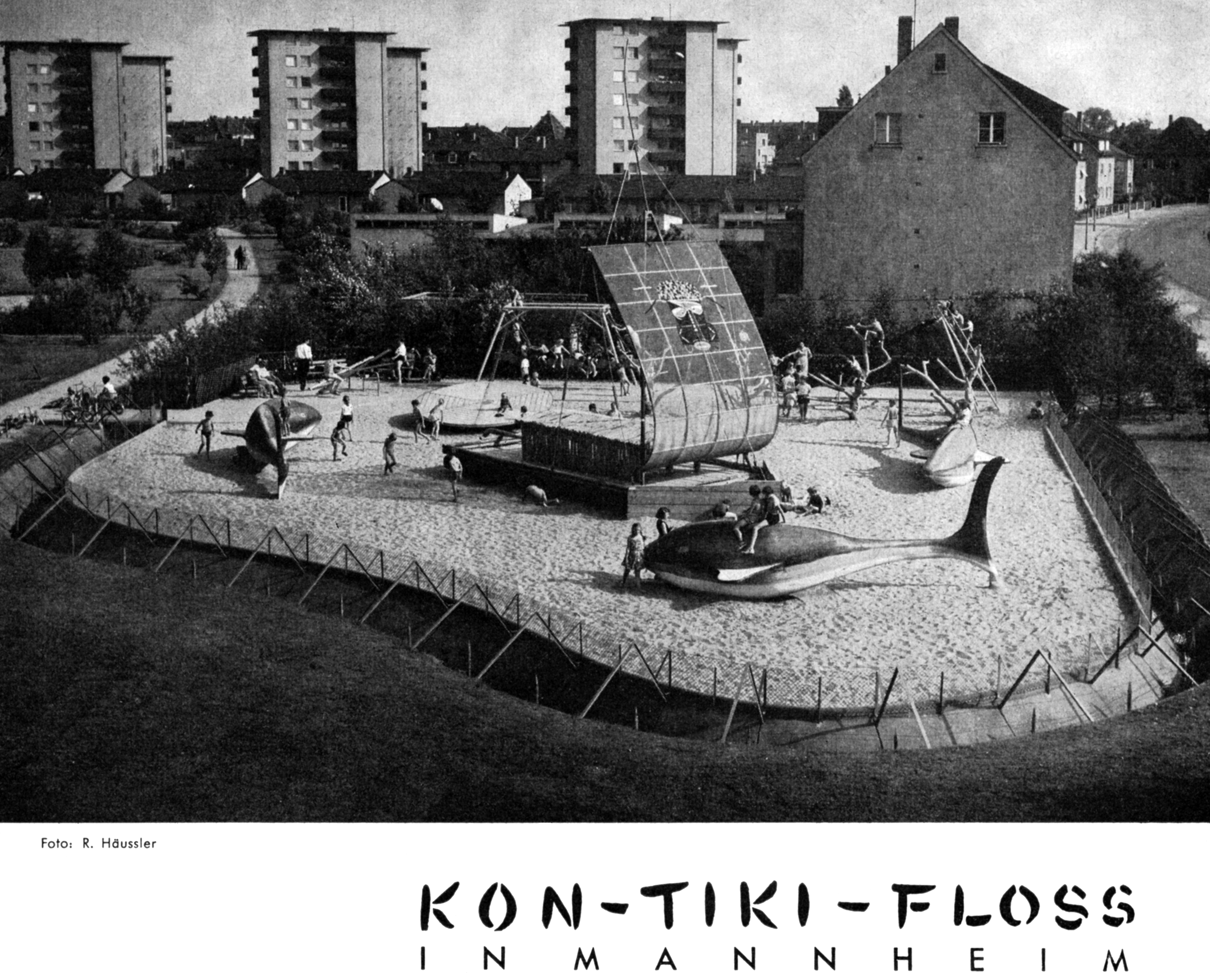 Almost anything you may think of have in one place or at one time been named Kon-Tiki or Kontiki. Here are but a few examples:

Kon-Tiki canned-sardines was once produced in Tønsberg, Norway, while you would have to travel to Chile if you would like eggs-Kon-Tiki. 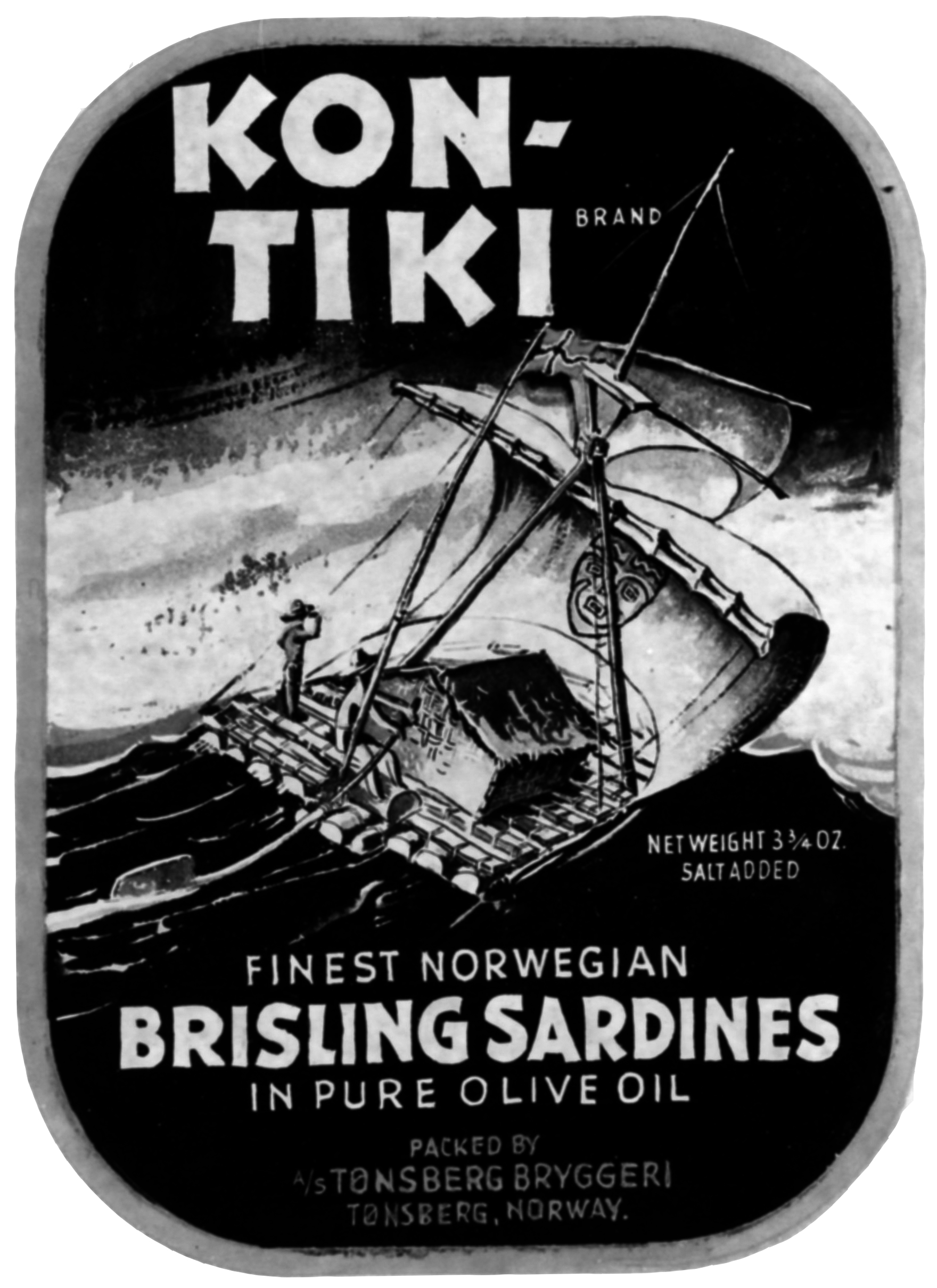 Are you into handi-craft? No problem. Kon-Tiki nitting patterns are readily available.

Once a brand of troucers were sold under this name, and even Ralf Lauren made a line of Hawai’ian styled shirts called Kon-Tiki. And in Australia, women could dress in style. 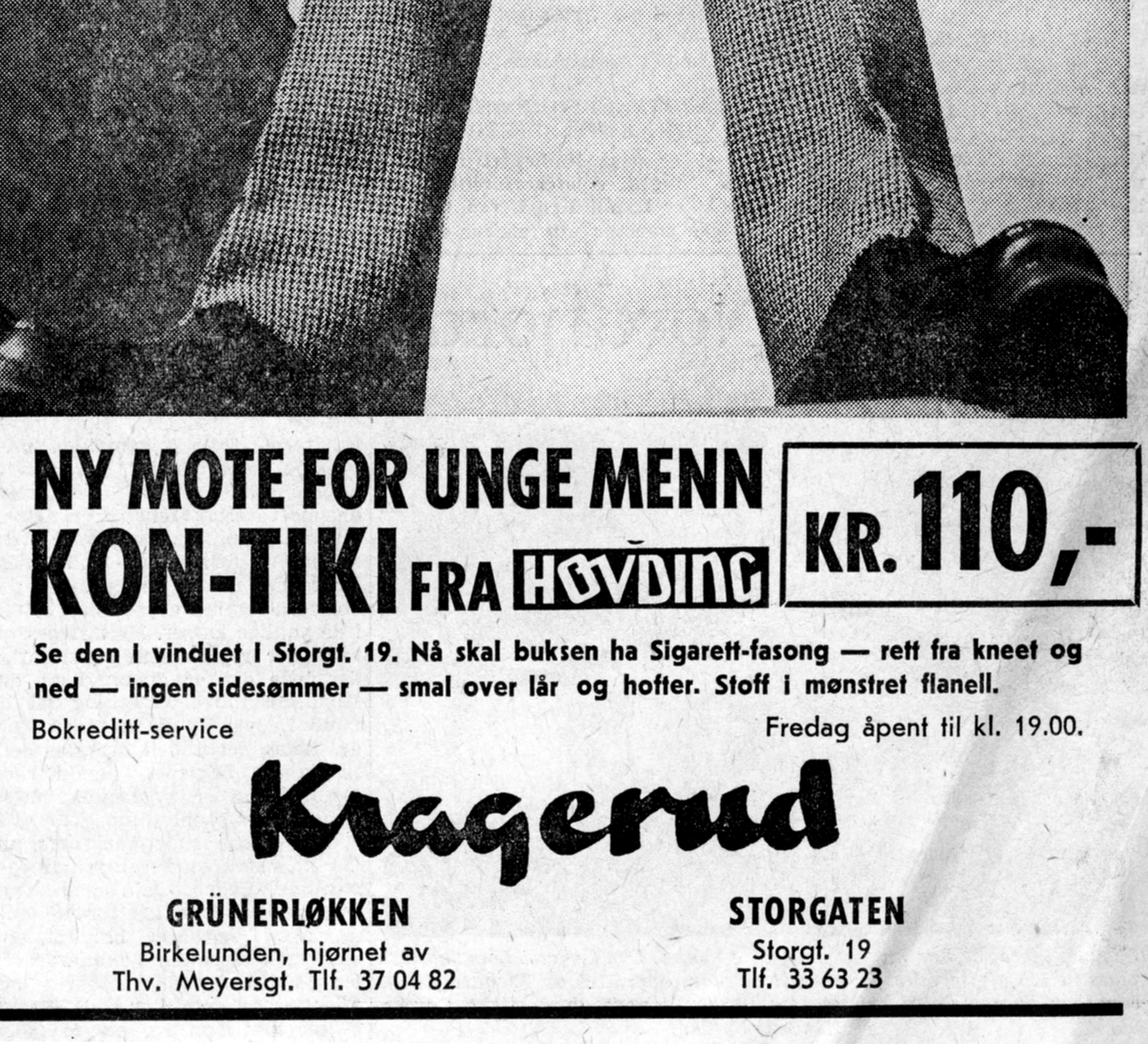 Kon-Tiki is not only for the adventureous. Nerds also like it. The first personal computers in Norway were produced by Kon-Tiki Data. In America you will find Kontiki, a company that once made peer-to-peer video systems. A computer software controlling traffic lights is also called Kon-Tiki in the US.

Spear’s Games in England developed a board game, in which you travel in a raft from Callao, Peru, to the Tuamotu Islands, battling the other players. 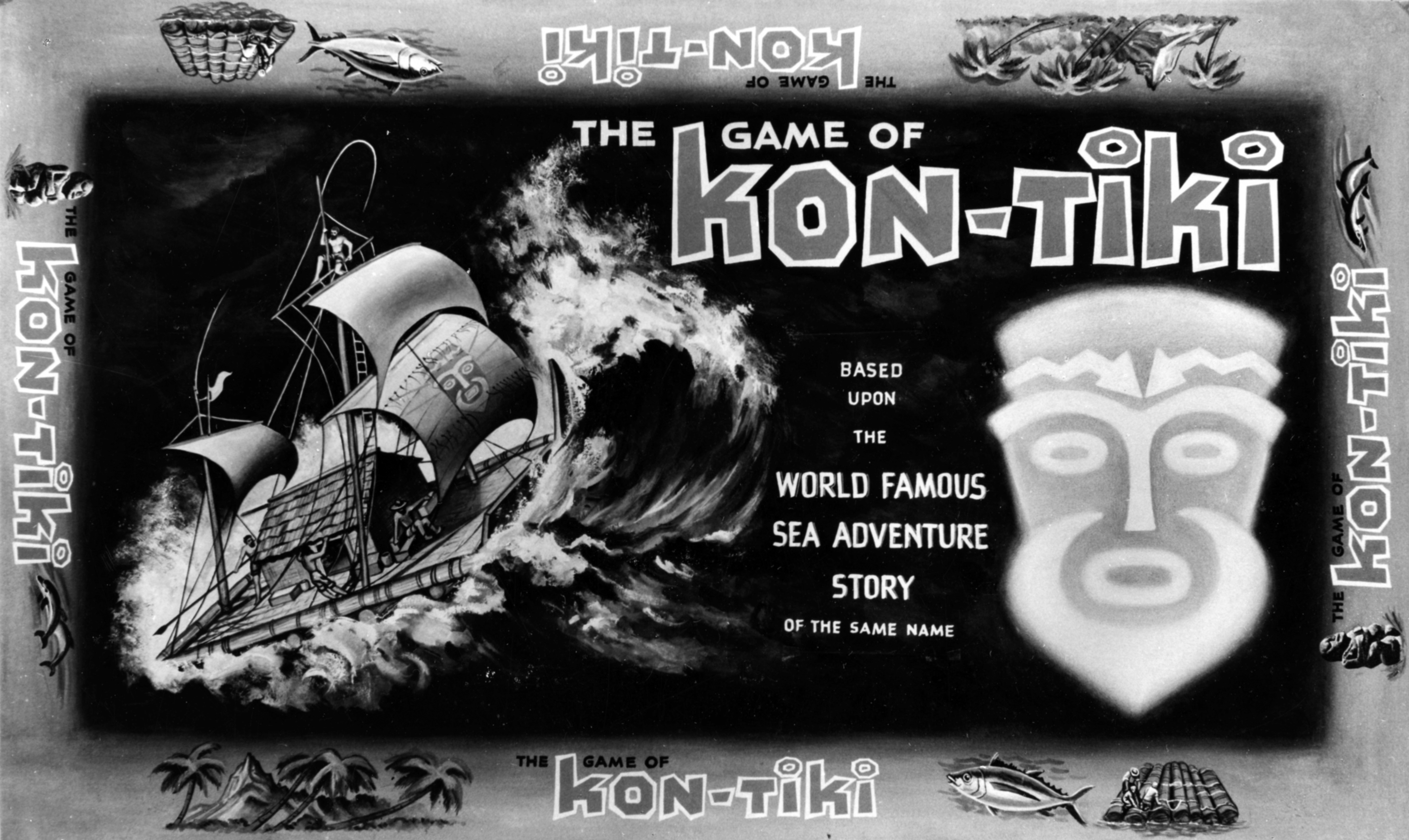 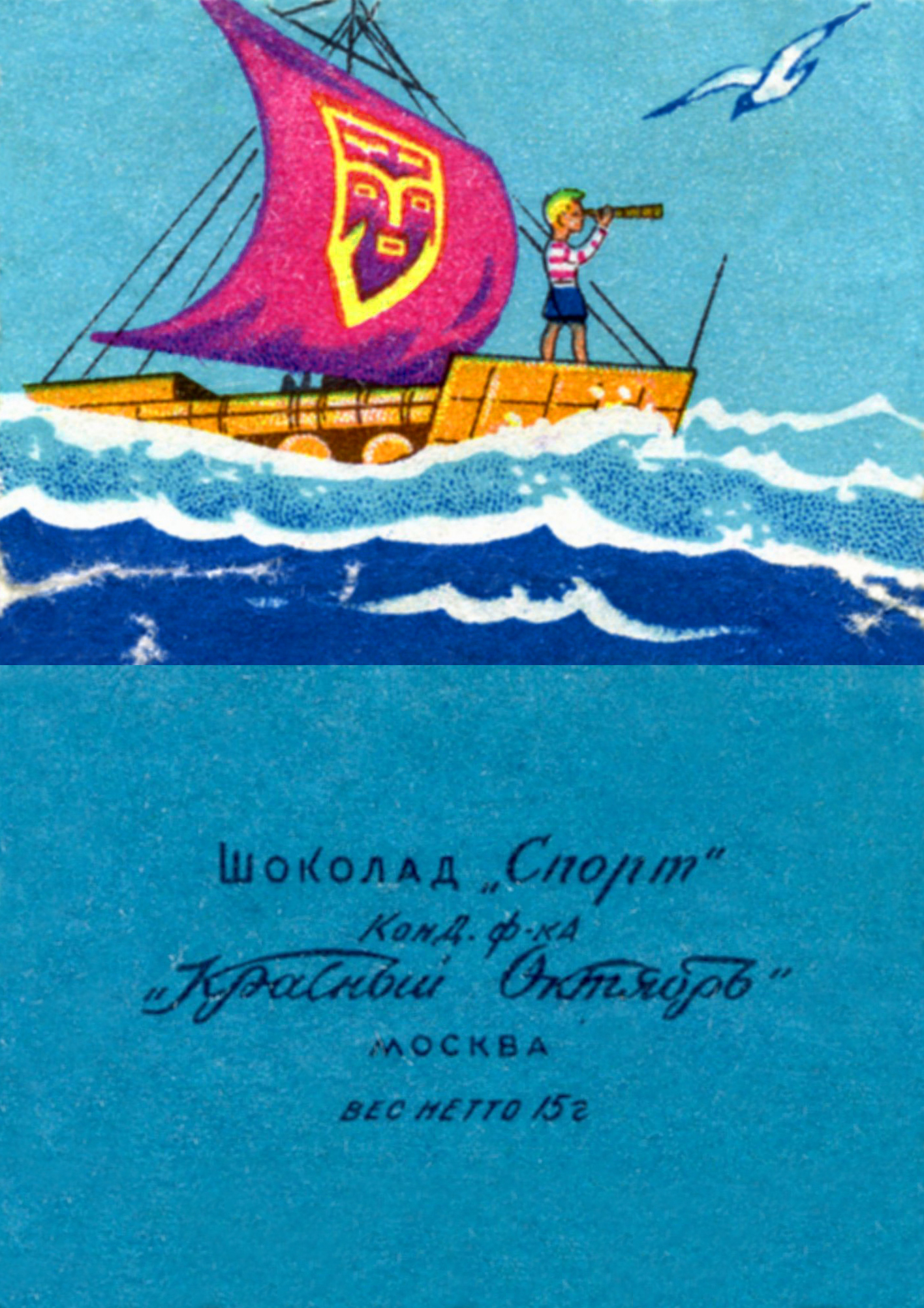 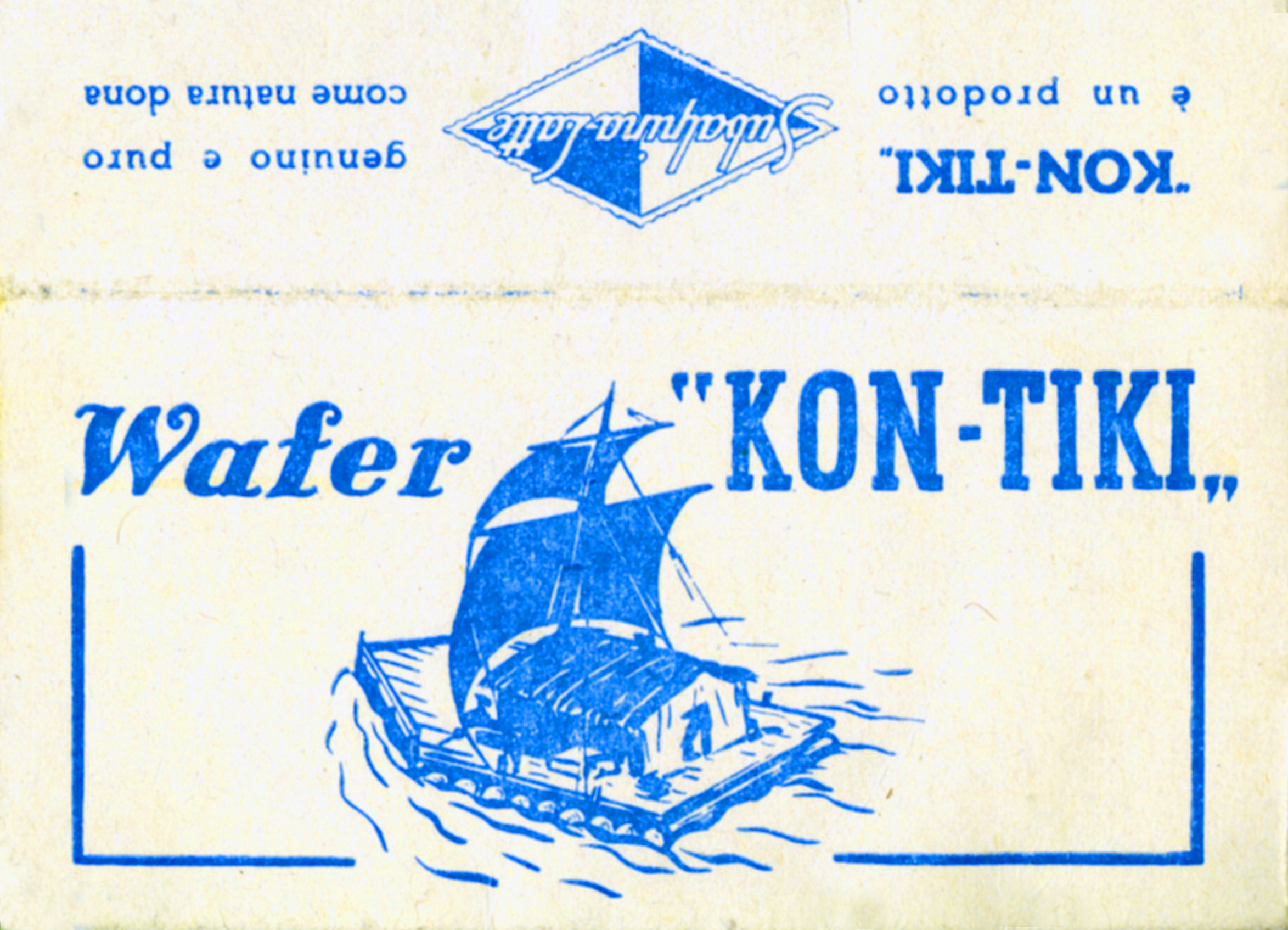 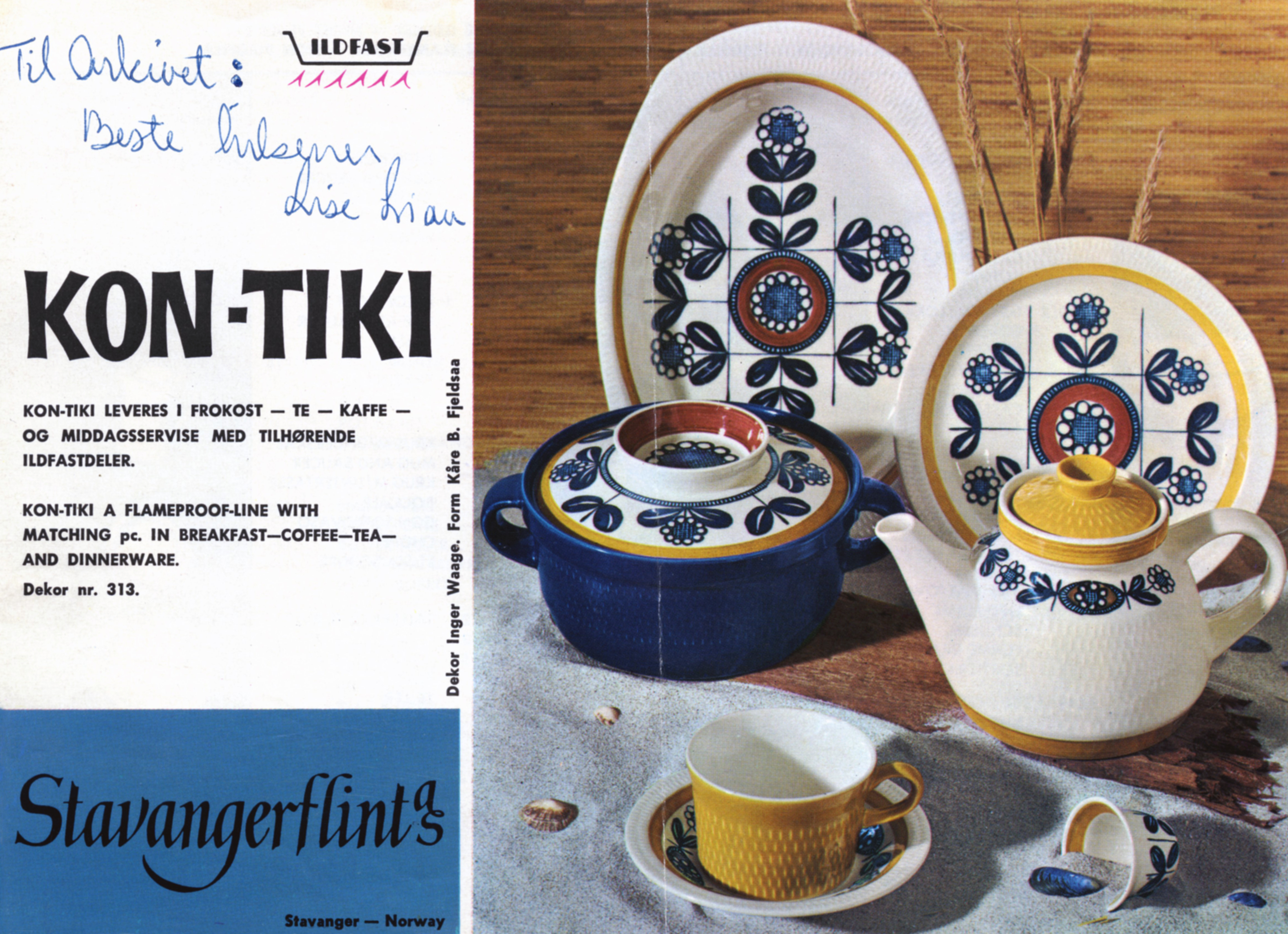